We are pleased to announce the appointment of two new cataloguers, Alison Somerset-Ward and Catherine Bannister, who will work with Julia Bishop and Steve Roud to catalogue and index the first part of the collection, comprising the children’s responses to the Opie’s oral lore of schoolchildren surveys of the 1950s and 1960s. Their work will result in a freely available website, enabling public access to the digitised materials. 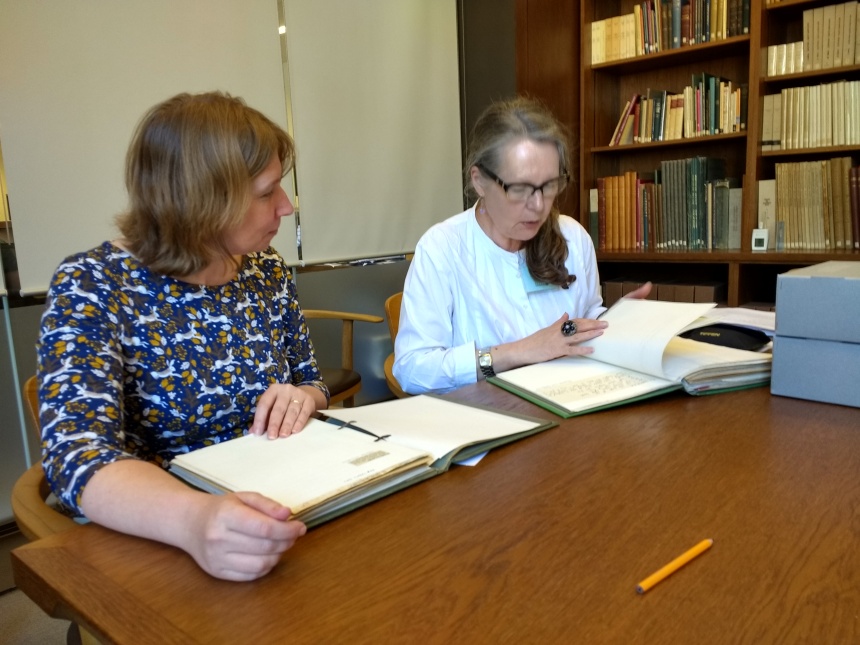 Catherine and Alison looking at the Opie Collection

It will also allow the thousands of individual items contributed, such as a game or rhyme, to be searched according to associated features, such as place and date played, type of game, setting in which played, and first line of text, facilitating historical research into play for all.

A great many of us ‘met’ Iona first through the numerous books she published, both jointly with Peter, and on her own part. They were a highly readable and vivid reminder of our own personal childhoods, as well as works of meticulous scholarship and new insights.

These pioneering works cover nursery rhymes, children’s literature, and the cultural traditions of childhood, especially those of play. They had a huge sphere of influence, inspiring and informing practitioners such as teachers, playworkers, architects and librarians, academics of many disciplines, and general audiences.

Iona came to the University of Sheffield in 1998 as guest of honour at The State of Play conference, organised by the National Centre for English Cultural Tradition. She had just published the last of the joint books, Children’s Games with Things, and was at the end of a career lasting over 50 years as a researcher into the worlds of young people. No wonder her talk was entitled ‘A Lifetime in the Playground’. (Click here to hear a recording or to read the transcript.) 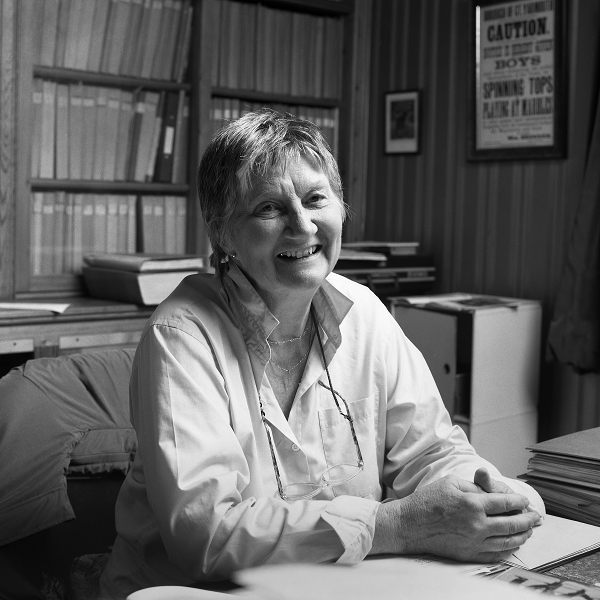 Iona made a distinctive contribution to the work of ‘the Opies’, even as she juggled being a wife and a mother, maintaining her integrity throughout. She was also a correspondent par excellence. Her letters evidence the generous support which she extended to fellow researchers, her enthusiasm for the fine detail, and her fundamental humanity.

Iona leaves the immense legacy of her work and the inspiration of her life.

The ‘Playing the Archive’ project research team are honoured to be working on the Opie archival collection. We look forward to understanding more about the Opies’ work and building on the field that Iona and Peter did so much to establish.

Jopson, L., A. Burn, and J. Robinson. 2014. The Opie Recordings: What’s Left to be Heard? In Children’s Games in the New Media Age: Childlore, Media and the Playground. Ed. by Andrew Burn and Chris Richards. Farnham: Ashgate.

My Tweets
Please specify a category on the Category Posts Widget settings.
Playing the Archive: Memory, Community and Mixed Reality Play is a partnership between DARE at the UCL Knowledge Lab; the Centre for Advanced Spatial Analysis at the Bartlett School of Architecture; the University of Sheffield; the Bodleian Libraries; the V&A Museum of Childhood, and the Digital Humanities Institute, Sheffield. The project is funded by the ESPRC (Content Creation and Consumption in the Digital Economy call).